When Paul laid his eyes on a literal pile of Labrador puppies outside of a Cabela’s in Boise, I knew we were leaving with one.

I’ve always had a dog by my side my whole life, and spending the summer without one made me miss that companionship. I told Paul that if we were going to do this it was now or never, a puppy was never something I wanted, but I wasn’t working and I would have the time to work with it. So after hours of going back and forth, we left Boise with an 11 week old puppy. My mom was less than thrilled to hear the news, living in a 20 foot trailer and getting a lab, we must be crazy. We named her Olive and I began working with her right away, watching YouTube videos, reading articles, and asking family and friends about taking care of a puppy. This was all new and pretty scary for me, a puppy is a lot of work and I wanted to do everything right. 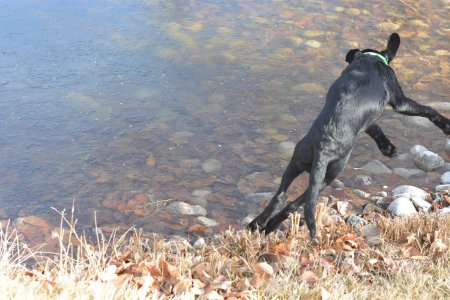 After easily learning the basics and quickly becoming house trained I realized having this dog wasn’t such a crazy idea. My main concern with her was that she understood when it was appropriate to be excited and when it was not. When you are living in a 20 foot travel trailer the last thing you want is a 70 pound lab to be bouncing all around. Olive caught on quickly, we took lots of walks and played outside, and she knew when she came back inside the trailer, it was time to settle down. In the first few months it was really important to teach her how to get rid of her puppy energy and then how to quickly calm down. With Idaho as her backyard, Olive had plenty of places to get her energy out. Right behind the our RV park was a river and it had a trail that ran along side of it. That trail was a saving grace, while Paul was away working all day and I was at home with the puppy we would walk that trail at least once a day, most days twice.

Olive is almost 7 months now and shes been great, no more accidents, she doesn’t chew anything but her toys, and she’s becoming a great listener, always looking to please. I’ve learned it’s not about the size of a house when it comes to having a dog, it’s about how much time you are willing to give up to work with them.